We are pleased to announce the upcoming product release of BenefitElect 4.8.2144.

We are pleased to announce the upcoming Release of BenefitElect (BE). We hope the features and fixes demonstrate our commitment to you, our clients, software that is designed to help you be successful as you navigate the world that is Benefit Administration. Here is a breakdown of items addressed in the release

Employee field edit pop up windows have been adjusted to open aligned with their correlating fields.  This has been verified against the latest version of supported browsers.  For the most part fields will now open left aligned underneath the associated field however a few fields, such as employee status pop ups, will open in center of screen.  Here are a couple of examples of how pop ups will now appear on screen: 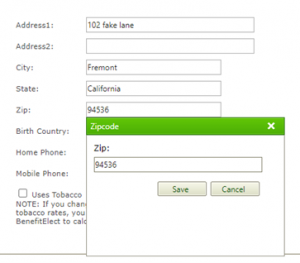 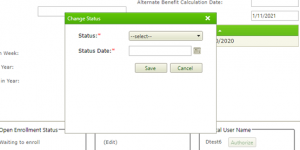 We have modified the system to remove the Benefit Effective Override date, if one exists, upon termination of an employee with active benefits.

In addition, the system has been changed to carry forward the Benefit Effective Override date, if on file, during the re hire process to be part of the active record.

These changes go hand in hand to ensure the Benefit Effective Override value is used for an employee getting rehired when Break in Service enabled, and the rules indicate to use this date for determining dates of coverage.

Improved messaging to employees who log out of the enrollment site in scenario where elections or any changes have occurred but…enrollment is not completed to indicate the following:

Expanded EOI configuration to apply early entrant rules to dependents (functionality previously existed for employees only) has been added to the system for certain benefit types such as Supplemental and Disability options.  Please contact your System Analyst if you would like to hear more about this feature.

There is now the ability to show Text instead of an actual form when EOI is required for a particular benefit.  A use case might be where EOI is handled directly with the carrier and so text with instructions and/or a link to the carrier’s site is all that would be required when employee is going through the enrollment process.

In addition, the system message to users that log out of Enrollment Site in a scenario where they did NOT make any changes to simply ask them the following:

The Enrollment Site has been improved to allow re-hired employees select beneficiaries that are already in the system from prior employments to be selected as beneficiaries for any applicable benefits during the enrollment process. As always, users will be able to add any new beneficiaries as well if they do not yet exist in the system.

We have added back the “My Forms” section to the Enrollment Site, as a way to display forms to employees that are not tied to a specific benefit, a company handbook is an example.

Corrections have been made to ensure the correct effective dates are applied based upon whether a re-hired employee was reactivated within or outside of the reinstatement rules defined for the benefits that are associated with Break in Service setup.

Addressed an issue with Break in Service functionality where a cost was incorrectly being written to a “waived” election record being created for a re-hired employee who previously had waived the benefit.

Addressed issue where the EOI pending flag was not being carried forward onto the new active record for a re-hired employee in a scenario where previous coverage was in an EOI pending state.  Issue resolved for both HR Admin and Inbound Census files.

Corrected issue where Enrollment Site and/or Confirmation Statement was not displaying the expected value, in some cases, for Basic Life where the setup to the plan involved using a flat $ option.

Addressed scenario where Age based reductions for Voluntary Life were not reflecting the expected value on Confirmation Statements and/or Enrollment summary.

If an employee originally requested an amount of coverage that exceeded the EOI threshold, but…then changed the requested amount to be lower than the threshold that requires EOI the system was still requiring EOI.  This has been corrected.